At 7:00 am this morning another deceased white shark was reported in at the beach in Franskraal. This is the 5th white shark carcass, and the largest to wash up in Gansbaai since 2012, says Alison Towner, white shark biologist for the Dyer Island Conservation Trust.
Wilfred Chivell coordinated with his team from Marine Dynamics to retrieve the shark with the Samil assisted by the International Marine Volunteers. The Department of Environmental Affairs have permitted an onsite dissection with shark expert Dr Malcolm Smale, who has flown in from Port Elizabeth, together with members of the national White Shark Research Group.
“The shark is a 4.9m female (total length) and we estimated her weight at 1,110kgs. We have her recorded around Dyer Island last year in June but we haven’t seen her since” says Towner. “She has also been recorded in Mossel Bay between August and December 2016. At this size, she is likely reproductively mature- which is rare to see and so impressive. Again there is much speculation flying around about Orcas killing the shark. There is a gaping wound on the sharks underside but until we have examined the injuries closely we cannot confirm if her death is indeed Orca related or not”.
Further reports came in of another two dead white sharks behind Dyer Island after this event but the DICT team could not find anything after they went searching the area.
“It’s is a very interesting time, says Towner, “the last white shark washed up here on the 8th of February and the cage diving boats struggled to see any sharks for almost two weeks. Unfortunately the cage diving boats all came home after seeing no sharks again today. We are incredibly grateful to the members of the community that helped us locate the shark this morning and will update with more accurate information on the cause of death and findings after the necropsy tomorrow.” 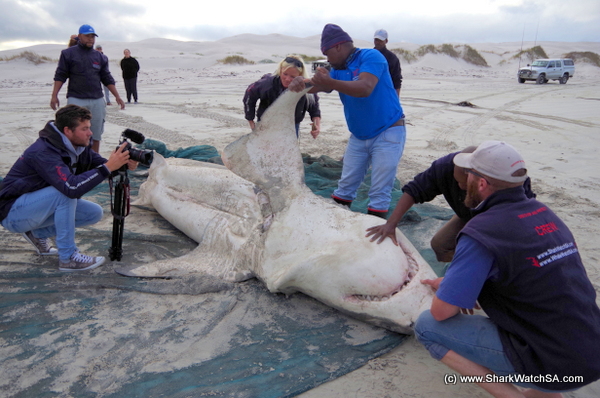 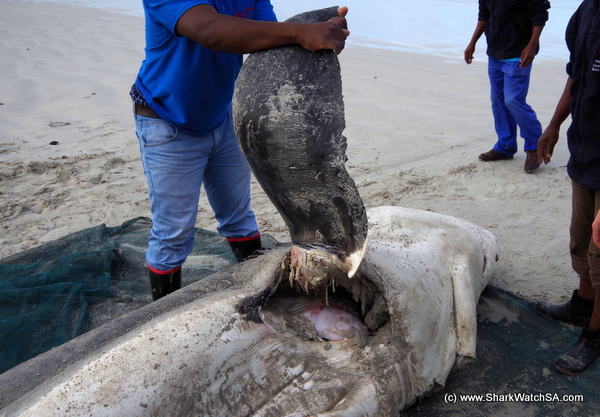 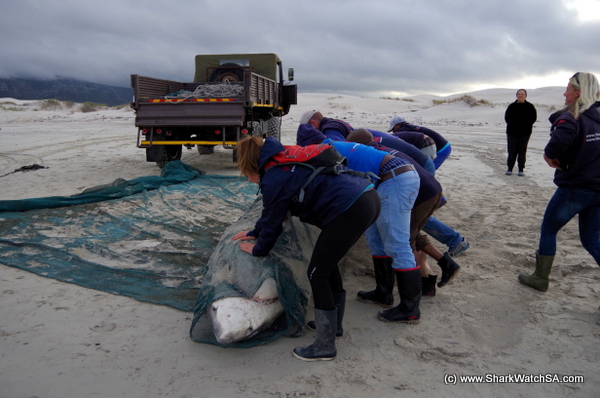 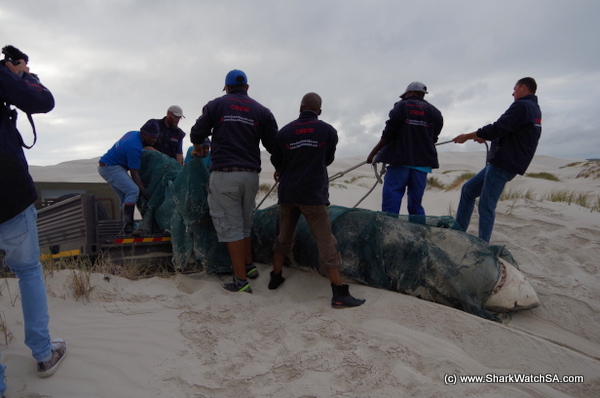 Dissection
Today's dissection is a lengthy process and currently still underway. It is the biggest white shark dissected in South Africa. However one major observation is that the shark was missing its entire liver. We will wait for the report to finalise all the details, but it is very likely that an orca may have been responsible for this type of injury.

Call Out
Another white shark has been found on Franskraal beach today at 5pm. Our team went straight there to recover the 3.5m male who is missing big pieces out of each flank. Alison V Towner, white shark biologist with Dyer Island Conservation Trust and Dr Malcolm Smale, will conduct the dissection tomorrow at International Marine Volunteers and notify the results. This specimen is in a more degraded state and cannot be frozen. We will notify further information just bear with us during this extraordinary time.

Dissection
The second male white shark to wash ashore in Gansbaai is also missing its entire liver and heart, again a near certain indication of an orca attack. Guiding biologist, Kelly Baker, matched this shark as one she had photographed on the 29th of April 2017 inshore on the Joubertsdam reef. She was able to recognise the shark using markings on the lower caudal fin (tail).
Dyer Island Conservation Trust’s Alison Towner says: " Today's necropsy will be quicker than the 4.9m female yesterday due to the mutilated state of its body and missing organs, many measurements will not be possible.
This is a difficult yet fascinating time. Something rarely documented in marine top predator behaviour in South Africa, says Towner. We are very grateful for everyone's help and patience, especially the local community members of Gansbaai who have been incredible."

A special thanks to the local Facebook Group, Wie Maak vir Gansbaai Lekker?? and specifically to Janine Taylor for contacting Wilfred and his team directly.
The White Shark Research Group is currently compiling a comprehensive report on the dissection and it will be released as soon as possible.

Call Out
Its 12pm and a third deceased white shark has washed ashore, this time in Struisbaai. The NSRI site manager notified Dr Alison Kock and the white shark research group. It was decided that the Dyer Island Conservation Trust team were the closest to the site and so they dispached their team once again to go and retrieve the shark carcass using two 4x4 vehicles and a small vessel trailor. "We have never seen anything like this.Todays carcass is another large white shark, he is a 4.5m male and his injuries seem to match those of the previous two dead specimens" says Alison Towner white shark biologist at the Dyer Island Conservation Trust. "It seems likely that orcas are again the cause of death but we will confirm after the necropsy. Obviously this is a very sad time for us all, nature can be extraordinary and unpredictable and the dexterity these enormous animals are capable of is mind blowing, almost surgical precision as they remove the squalene rich liver of the white sharks and dump their carcass"

Dissection
The end of another long day, our third white shark necropsy in 7 days, and hopefully the last. This one took 6 hours to complete and was led by Dyer Island Conservation Trust’s white shark biologist Alison Towner, with support from Marine Dynamics biologist Kelly Baker. They followed the comprehensive protocol of Dr Malcolm Smale who they had previously assisted during the necropsies of the first two sharks.

The team collected samples for members of the white shark research group in South Africa and Department of Environmental Affairs for a multitude of research projects. The necropsy began with extensive morphometric measurements to obtain accurate size information. Parasites such as copepods and nematodes are extracted and preserved, muscle tissue is preserved for genetics diet and physiology studies and all the wounds measured and examined closely. Vertebrae is collected for age growth studies and all organs are inspected weighed and measured.

This white shark was a mature male of 4.5m with fully calcified claspers. His open wound was located under his left pectoral and exposed his body cavity. His liver had been removed, but unlike the smaller 3.5m white shark stranded on the 5th May he still had his heart in place. His stomach contained cape fur seal remnants and shark vertebrae. He also had the tip of a stingray barb embedded in his jaw.

The team have worked tirelessly this passed week and feel satisified that they have collected a vast amount of very useful samples to improve our knowledge of this species in SA. They concluded that all three white sharks were killed by Orca via the removal of their livers. Not one shark had an acoustic transmitter so they were identified on the Marine Dynamics database by Kelly Baker using their dorsal and caudal fin markings.

"These observations are unprecdented" says Alison Towner. "We know from photo ID, genetic and tracking studies that this population of sharks is open and transient. We have identified and matched each of the three dead white sharks in our database but the fact is from now on this is a grey area and we don't really know how long the sharks will stay away from the area as a result of predation pressure."

We are grateful to everyone involved especially the NSRI in Struisbaai, Danie Viljoen, Dr Alison Kock, Dr Malcolm Smale and the White Shark Research Group as well as Sarika Singh from Departemnet of Environmental Affairs.

It was not the sunniest day out at sea! But we had amazing Bronze whaler shark activity trough out the hole trip!

A little bit of patience went a long way today with some slower activity experienced in the bay, however, we were rewarded with some fantastic views of...