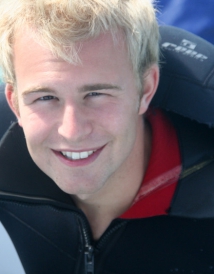 Oliver first joined Marine Dynamics in 2007 as a volunteer, while studying Oceanography at the National Oceanography Centre, Southampton. After returning to the UK and earning his Bachelor of Science (with honours) from the University of Southampton, Oliver returned to South Africa to continue studying great white sharks. He spent a year in Mossel Bay with Oceans Research tagging and acoustically tracking sharks, before re-joining Marine Dynamics and the Dyer Island Conservation Trust as full-time crew member, biologist and skipper in 2009. Biotelemetry has formed the backbone of his research expertise and he has tagged 50+ white sharks with a variety of satellite, acoustic, and camera/accelerometer tags, both directly through his research activities with the Dyer Island Conservation Trust, and in collaborations with Ocearch, Stanford University, Oceans Research, and Customised Animal Tracking Solutions (CATS). He has the claim-to-fame of being the only researcher to tag three of South Africa’s most iconic white sharks – Slashfin, Nemo and Zane (see video) and in 2013, earned his Master’s in Zoology through University of Pretoria on white shark movement patterns. Last year, he published the first of the findings from our acoustic tracking programme in Marine Ecology Progress Series. Currently, Oliver is employed by the Royal Netherlands Institute for Sea Research (NIOZ), where he is the principle investigator of ecology within the EMERGO Project, but remains an associate biologist with the Dyer Island Conservation Trust, and regularly returns to South Africa to conduct research. To keep up to date with Oliver’s publications look up Oliver Jewell on Google Scholar.

At Marine Dynamics we live by our motto of Discover & Protect and believe that collaboration is the key to conservation success.

Join us in saving the marine life that we all hold so dear to our hearts and remember that Your Choice Does Make A Difference!