On the Tracks of the Great White Shark (Episode 2)

This year, 2015, was the tenth year of cooperation with Prof Sperone Emilio from the University of Calabria, Italy – and the expedition’s 12th trip to Kleinbaai for their ongoing research.

Dr. Micarelli is the Responsible Scientific Coordinator of the Scientific Expedition called “Sulle Orme Del Grande Squalo Bianco” which directly translates to “On the tracks of the Great White Shark”. This expedition rotates students from various  universities out to capture data for their ongoing research.
The group arrived on the afternoon of the 13th April 2015, at their accommodation at Saxon Lodge in Gansbaai, and spent their first evening receiving orientation on the week ahead. Expectations were set with their record of 400 Great White Shark sightings planned for the culmination of 12 years of data capturing to date. 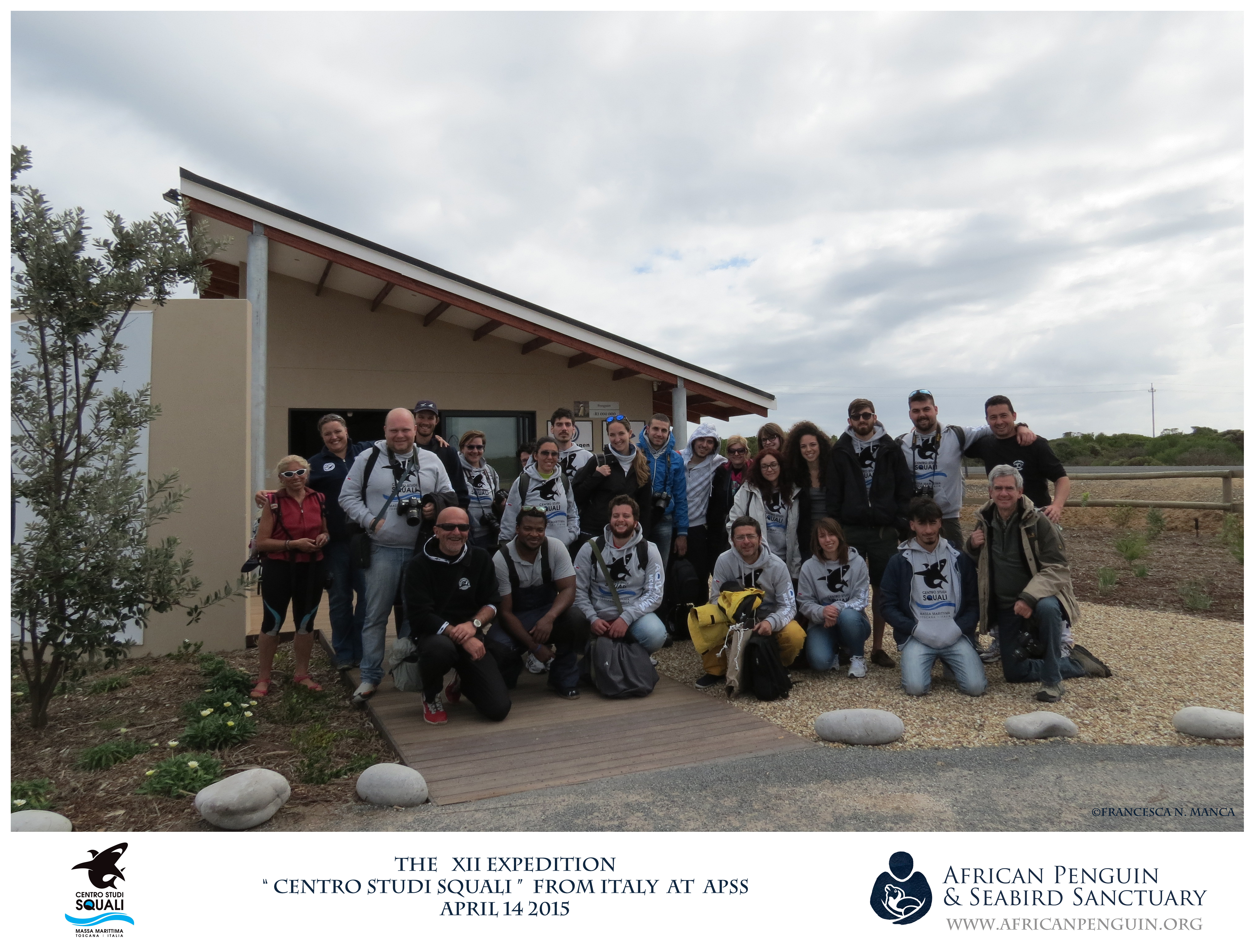 Primo visit to the African Penguin and Seabird Sanctuary

The staff of this XXIX ° expedition is very organized and each crew member has a clear responsibility. The coordination of all the activities is managed by Ph.D. Prof. Primo Micarelli, Ph.D, Prof. Emilio Sperone and Ph.D, Prof. Tripepi and the group is divided into five subgroups.

Group 1: Recognition of individual sharks by recording the presence of wounds, scars, external parasites or discolouration. The information collected is used to reconstruct a profile of each shark that comes close to the boat. Team: Gianni Giglio, Armando Santoro, Marco Minervino.

Group 2: Deals with the determination of the shape of the dorsal fins of sharks taking photographs that allow the detection of the rear edge of this fin (considered the fingerprint of each shark). Team: Chiara Romano, Jennifer Pecchia and Zaira Da Ros.

Group 3: Responsible for data collection aimed at the recognition of social behavior these predators exhibited on "Berta", a decoy in the shape of seal fitted with a camera. Team: Elettra Chiarabelli, Ylenia and Francesca Fabietti Rapisarda.

Group 4: Responsible to collect data on the individual behavior on the surface towards the "bait" that is used to attract the sharks. Team: Pierluca Santo and Guido Pizzabiocca Lanzi.

Group 5: Worked on the bow of the boat and was responsible for the collection of data on the number of interactions with the decoy. Team: Mirko Della Porta Marzia Verduci, Francesca Romana Reinero and Silvio Mazzei. 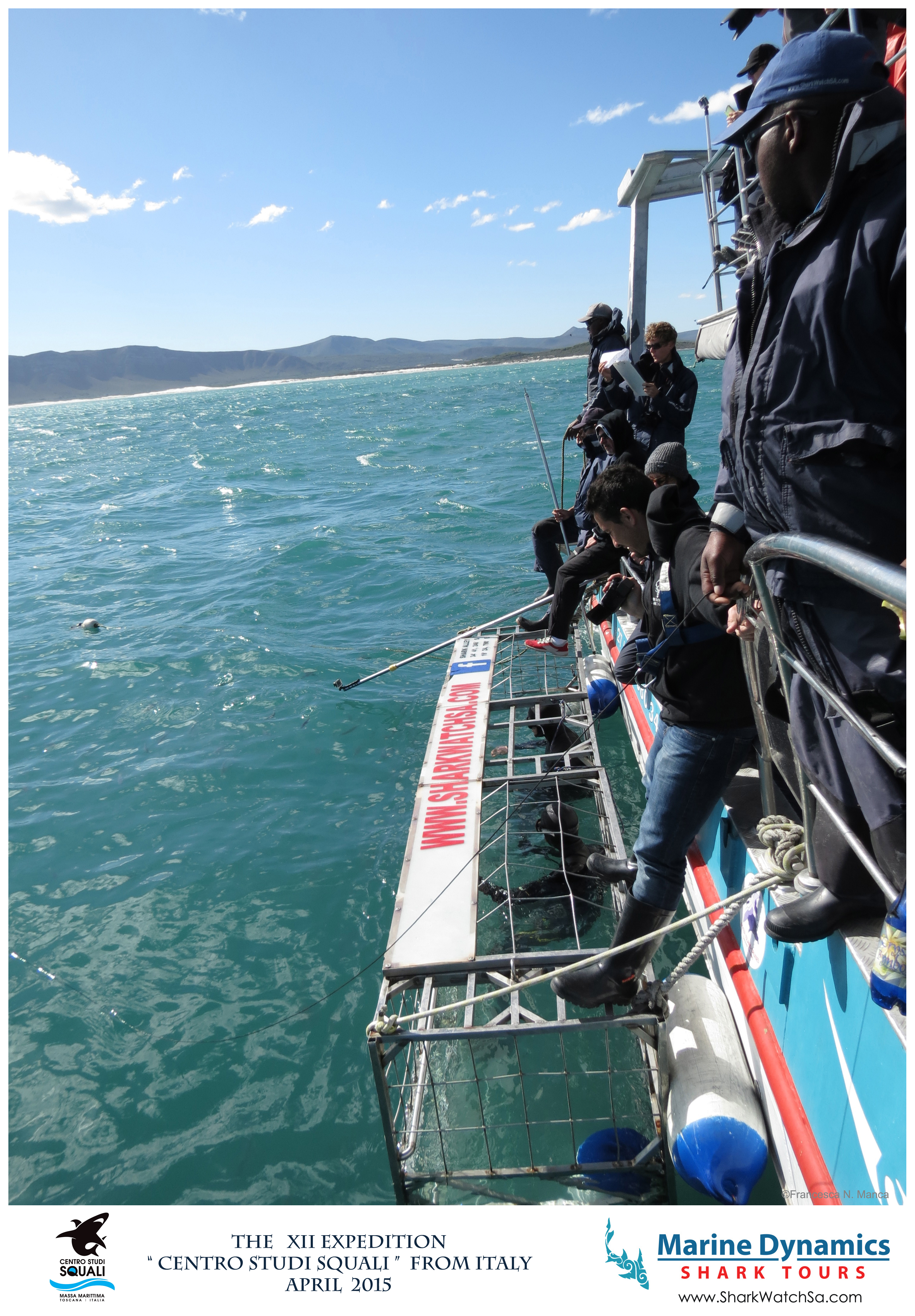 This hard work over six days brought the total number of individuals sighted on this particular trip to 67, a record number for all of their trips so far. Dr. Micarelli was very excited: “This expedition will remain the best we have ever had! With this number our total sightings in 12 years has risen to 421 animal’s catalouged and studied. Way over the record we have set ourselves! But more importantly, apart from the number of sharks seen was the magnificent behaviour we captured, which will enable us to complete a part of our study and publish this soon. Nature rewarded us with great experiences!”

During their expedition trips with Marine Dynamics they also saw the Marine Big 5 around the Dyer Island Reserve in Van Dyksbay. The first day they saw a large group of dolphins and on the last day they sighted a Bryde’s Whale (Balaenoptera edeni) giving all on board of Slashfin a wonderful photographic opportunity. 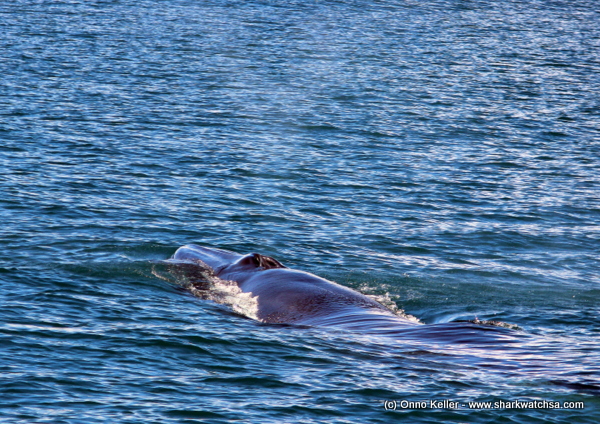 Simone Rizzuto, also a past student of this group, has been with Marine Dynamics for more than a month already, working in conjunction with Georgia French from the Sussex University on isotope sampling on Great White Sharks. Simone shared this work in a presentation and explained the process of collecting samples over a six month period.

All activities were filmed by students from the group, Daniele Giglioli and Enrico Rabboni, as well as the videographers from Marine Dynamics Shark Tours. Daniele was responsible for the footage from the cage and Enrico from the boat. The special decoy, handmade by Enrico, was well handled by our MD crew member Kwezi.

A drone was also deployed to capture overhead images and underwater images and footage was caught on GoPro’s and video cameras. Enrico unfortunately lost one of his GoPro’s and a visitor and co-sponsor of Alison Towner’s PhD, Michael Scholl of Save our Seas Foundation very generously replaced this lost GoPro to ensure the data capturing went on without interruption!!!

The group enjoyed a very interesting shark dissection done at the International Marine Volunteer lodge, in collaboration with scientists from the University of Limpopo. Doctoral students, Tshepo and Modjadji, from University of Limpopo conducted the dissection. All this took place under the watchful eye of Prof. Susan Dippenaar and Bea Jordaan who visit the DICT yearly to further their scientific research on copepods as well as other parasites from shark gills.

On the last day, after completing our sightings we made the usual visit to Geyser Rock, where we saw about 60,000 cape fur seals (Arctocephalus pusillus pusillus - http://www.dict.org.za/seals.php). They are very smelly but exceptionally nice to see – and interestingly their bleats are very similar to those of sheep. 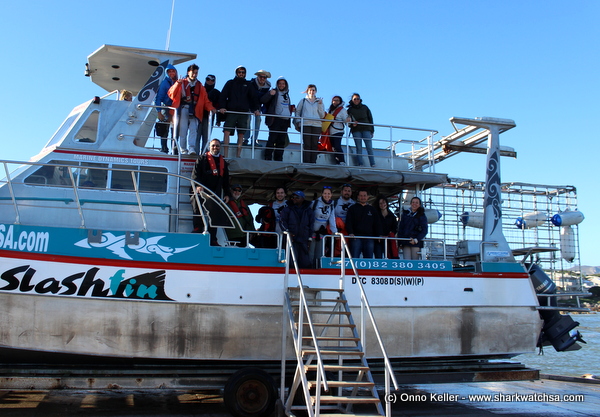 These trips never fail to provide wonderful experiences, not only with regard to the study of the great white shark, but also with other interesting adventures planned to give this group the maximum exposure whilst visiting our group in Gansbaai. New friendships are made and new collaborations are forged – both professionally and personally.

The last evening ended with a boatride on the "Klein" river on board of the "African Queen", a trip organized by the Saxon Lodge, who hosts the Primo Group every year. Caron and Vanessa prepared and organized the "braai", (the typical South African grilled meat cooked on an open flame) on board whilst the boat crossed the river under a starry sky with the sounds of the animals that inhabit the river banks in background.